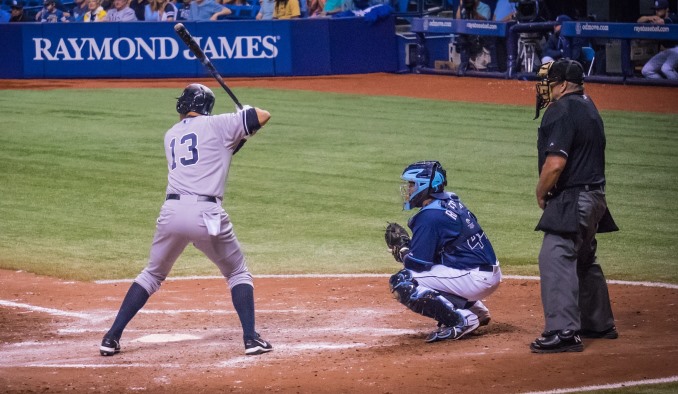 The right hitting mentality and approach can be the difference between a hit and an out. In a game of centimeters, it’s imperative for you to strategically approach each at bat according to the game situation at hand. How many are on base? How many strikes do you have on you? How has the pitcher been pitching you all game?

The most effective hitting approach is one that is flexible, simple, and situationally dependent. For a novice, baseball and softball can seem boring and uninspiring. But to those of us who understand the game, we know that there is so much more than meets the eye. For you to develop an effective batting approach, you have to learn the game and understand its’ intricacies. You need to know the difference between one strike and two strike hitting. You’ll need to understand how to spot a pitcher’s tendencies and how to adapt your approach to expose a weakness.

In this article, we’re going to cover how to develop a strong batting approach that will keep you engaged and focused for every at bat, regardless of the game situation.

Bottom Line: Before we get to a detailed description of plate strategy, it’s important to remember that at the end of the day, just simply watch the ball out of the pitcher’s hands and react. The thinking aspect of this should happen before and after the pitch – NOT while the pitch is being thrown. If you think too much, you’ll screw yourself up. So remember, simply see the ball and hit the ball.

If you don’t have any prior knowledge of the pitcher before coming into the game, it’s going to be extra important for you to pay attention throughout the game to pick up tendencies and patterns. This means watching the pitcher’s every move from the dugout. Don’t just take a break and sit on the bench hanging out with teammates. It’s imperative that you stay dialed in and watching the pitcher.

Is the pitcher throwing a first pitch strike nearly every at bat? What is the go-to two strike pitch? Are they throwing middle-away from the batter, or are they trying to throw inside?

Unless you’re on a professional level where pitchers are throwing to each batter differently, there is a good chance you can pick up tendencies that will assist you in your at-bat.

Jot down little mental notes throughout the game. For example, if the pitcher is drilling the first pitch fastball down the middle, maybe you should develop the hitting strategy of swinging first pitch if you see that fastball. Maybe the pitcher is throwing a curveball with two strikes – so you should be ready to hit an off-speed pitch, but foul off the fastballs.

At this juncture, you’re simply taking mental notes. Lock them away for you at-bat.

Visualize While in The On-Deck Circle

Once you’ve developed your hitting plan based on the pitcher’s tendencies, it’s time to start visualizing while you’re on the on-deck circle. In fact, this can even happen when you’re in the hole or even in the dugout. You can never visualize too much.

What you want to do here is see yourself at the plate agains the pitcher. Visualize in your mind’s eye the pitch coming at you and you reacting appropriately. See any outside pitch and hit it the other way. See an inside pitch and pull it down the line. See an off-speed pitch and wait back and crush the ball the other way. Develop each scenario in your head where you’re crushing the ball on various pitches.

Additionally, you even want to visualize yourself taking the pitch. If it’s off the plate, don’t swing! Visualize what that looks like and develop the patience to take a pitch instead of free swinging.

Create this visualization and really feel every sense while you’re doing this. What does it feel like to crush the ball? What does it sound like? What does it look like as you hit the ball and it takes off? Even, what does it smell like? You’re sitting at the plate with the dirt in the air, the smell of the catcher’s leather glove…. Really set the scene and pay attention to each detail.

Bonus: Use these visualization techniques while you’re laying in bed going to sleep at night.

Step Up to the Plate

As you step up to the plate, the most important thing for you the feel in the moment is confidence. You’ve prepared for this. You’ve studied the pitcher, you’ve visualized yourself getting a hit, and now you’re ready and deserving to see that come to life.

Feel the confidence and boldness coursing through your veins. Keep visualizing that hit in your mind’s eye as you are walking up and digging in. Keep your chest out and stand up straight in order to project confidence to the pitcher.

Pitchers will thrive on a batter that steps up to the plate timidly. That pitcher is watching your every move just like you are watching theirs. So project confidence, even if you don’t feel it!

Adjust Your Approach Depending on the Count

It’s time to package everything together. How is the pitcher pitching? What are the tendencies and patterns? What have you visualized?

It’s also a good time to mention the fact that you should develop your own hitting approach regardless of what the pitcher is throwing. Perhaps you are a #3 hitter and are expected to hit for a bit of power and drive in runs. But perhaps you are speedy player and can steal a lot of bases – so your approach might be to simply try to get on base any way possible.

Really figure out who you are as a player, because it matters. For those who are speedy and can run the base paths with ease – it’s good to develop a patient hitting approach where you take a lot of pitches and force the pitcher to throw you strikes. If you are a #3, #4, or #5 hitter, it might be best for you to develop the approach of hitting early in the count in order to likely hit fastballs.

Either way, figure out what you excel in and develop your hitting strategy around that.

Whichever your strategy is, we’ll take a general synopsis of what each count should look like and what most batter’s should be thinking about in-between pitches. Again, remember that you need to develop the ability to shut your mind down while the pitch is being pitched. Don’t think. Just see the ball and hit.

Making Adjustments After Each At-Bat

As you go throughout a game and have multiple at-bats, be sure to learn and grow after each one. What went well and what didn’t? What adjustments need to be made for the next at-bat? Or, if you had a really poor at bat, maybe you just simply need to forget it ever happened and get ready for your next at-bat.

Maybe you struck out and looked silly on the pitcher’s changeup. Well, it’s a good chance you’re going to see that again. Maybe you crushed the pitcher’s fastball – well, they might try to throw you off speed next at bat.

The most important thing here is to develop a kind of intelligence on the field where you’re learning and making alterations each at bat. The pitcher is making adjustments to how they pitch you, so you need to make adjustments to how you hit them. It’s truly a chess match and the best players know how to play this part of the game.

Conclusion: Adapting Throughout a Game & Season

As a season goes, you’re going to go in and out of slumps and hitting streaks. Your hitting approach needs to change depending on where you’re at in the season.

For those dealing with a slump, it’s usually best to try and hit the ball to the opposite field. George Brett used to always do that if he was struggling – he’d think middle/away and would try to hit the ball to the opposite field. What this does is lock your shoulder in from opening up, and it can often make you a bit more selective at the plate.

For those on a hot streak, keep doing what you’re doing and stay dialed in. Study those pitchers and keep getting better as the season goes.

All in all, the baseball hitting approach should be developed and thought about outside of an actual pitch being thrown at you. When you’re hitting the ball, you want to simply rely on your reflexes and preparation, not your brain. Just see the ball, hit the ball, and don’t overthink it. Leave the thinking for another time.