Standing behind the home plate and receiving the ball from the pitcher, holds a very important position in the field.

The catcher has to keep an eye on the field while also calling the pitches for the pitcher. 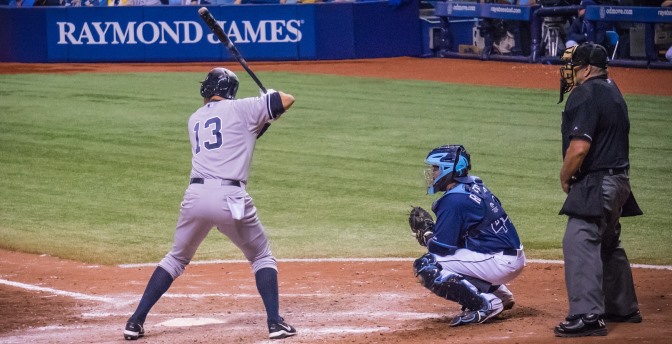 The catcher’s position is pretty demanding in the game. For a baseball catcher stance, diversity is the key. A catcher should have full-body control, and his body should be flexible.

A catcher can be good in the game by learning basic two stances: a ready stance and a relaxed stance.

There are two strikes on batter plus the runners on base; it is the right circumstances to use a ready stance.

This scenario will lead to anyone of two situations: either throw out the base runner or block the wild pitch. With hips a bit high above the ground and weight on the feet, the ready stance is a raised squat in simple words.

When there are less than two strikes along with the empty bases, a relaxed stance has been used by putting your shoulders and feet wide apart and taking the squat position. With your feet straight, shoulders and hips to be square to the pitcher. Be relaxed and let your mitt hand relax too.

Your palm should be pointing at the pitcher with your throwing hand behind your shoe or back. Let the pitcher have a good low target.

The player should know how to balance between both kinds of stances. He should be able to switch between both. One way to achieve that is by practicing daily. A catcher should maintain each stance for a few seconds.

When you practice daily, you will switch between the two stances quickly without getting tired.

Baseball catcher gears are getting advanced year after year. They are the catcher’s requirement to prevent injury in the game. Catchers are getting the ball impact directly, and thus they need protection. When behind the plate, this equipment are used by the catcher: 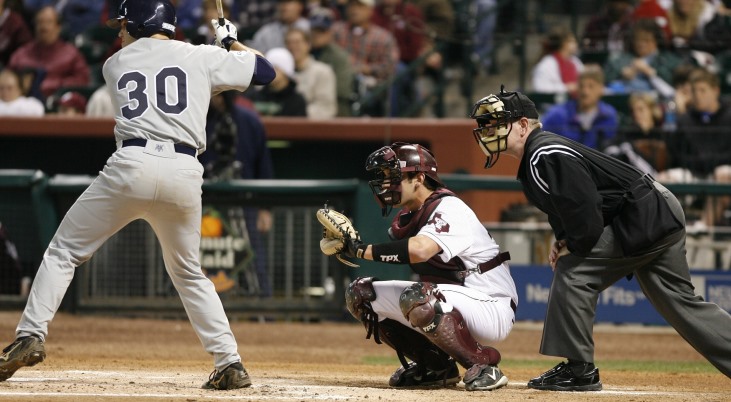 Catcher’s Mask: Protection of the face is essential in baseball. To do that, the catcher uses a mask that is like the mask of the ice-hockey goaltenders. This mask has sections to shield the head top and the sides of the face.

Catcher’s Mitt: It is the glove but with extra padding. It lowers the ball impact and guards the hands of the catchers.

Chest Protector: As the name indicates, it aids in chest protection. This catcher’s gear has rubber, gel, or plastic foam padding to protect the chest when the player cannot catch the ball.

The latest chest protectors also have extra padding extended towards the non-throwing shoulder or the glove hand to add further protection.

Leg Guards: It guards the leg and knee if the ball hits them. Also known as spike protectors, they aid against the injury that the advancing home base runner with spike up leads to.

Now many shin guards are available that integrate a flap that covers the top area of the feet.

Cup: The groin region needs protection as well during the game. Catchers and other players as well wear it under their clothes.

Other than these basic pieces of gear, some catchers also go for the following equipment:

Knee Savers: They are used to protect the catcher when he is in the squatting position. These are the specified pads having air in between to support the knee ligaments. They can be attached with the shin guard’s straps.

Throat Protector: It is a hard plastic plate to guard the throat region. It usually hangs from the end of the catcher’s mask.

In mainly all youth baseball matches, and even during the high school game, it is a must equipment as any impact could lead to the severe injury of the windpipe. The protector of the throat is made compulsory for all the young players.

Inner Protective Glove: A batting glove is usually worn under the mitt to provide extra protection while catching the ball. It cushions the hands of the catcher during a fastball.

Thumb Guard: A special plastic guard keeps the thumb protected when the ball hits the thumb. It is worn inside the glove and offers complete protection to the thumb.

Tips to become a better Catcher player in baseball

The top tip to becoming a better catcher is to protect yourself first. Using all the protective gear and doing the practices that don’t lead to injury is highly suggested. Also, the catcher should catch the ball from the glove hand only. Using the other hand might lead to its severe injury due to the higher impact of the ball.

After protecting yourself first, it is now time to think of the game. The catcher needs to have a sound mind with a quick and strong body.

He has to call the pitches by keeping a keen eye on everything happening in the game. Catchers are the smartest players of the team usually that’s why many managers today are former catchers.

Catchers should be experts in taking decisions. They function as an assistant coach in the field. Also, the catcher should be a great receiver, as it will make you win the match and boost the confidence of the pitcher in the next game.

Practice, practice, and practice; it is the only thing to improve your playing. A catcher should be tough to withstand different impacts of the ball.

However, he should be soft from the inside to love the position he is playing with; only then he can achieve bigger goals.