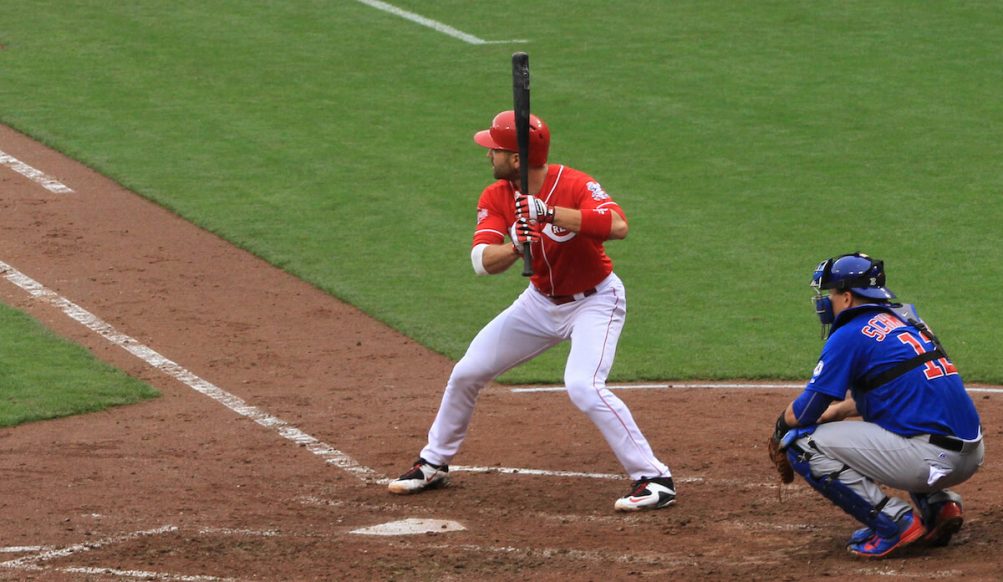 There are a lot of debates in the baseball world about whether or not you should choke up on a baseball bat. Some people believe that it’s a good idea, while others think that it’s a bad idea. So which is it? Should you choke up on your bat or not? In this article, we will take a look at the pros and cons of choking up on a bat and see what the research has to say about it.

What Does it Mean to Choke Up On a Bat?

To choke up on a bat means to grip the baseball bat higher up on the handle. Young hitters usually do this to give them more control over their swing. In other words, doing so decreases rotational inertia because the bulk mass is pushed closer to the rotational axis.

As a result of which, the hitter can easily rotate the bat. (Source)

But, is choking up on a bat really a good idea? Let’s find out.

There are several benefits of choking up on a bat. It enables the hitter to:

There are also some drawbacks to choking up on a bat. These include:

So, should you choke up on a bat? It depends on your hitting style and what you’re trying to accomplish at the plate. If you want to increase your batting average and have more control over your swing, then choking up on a bat is a good idea.

However, if you’re looking to hit for more power, you may want to grip the bat lower down on the handle.

Ultimately, it’s up to you and what works best for you. Try different positions until you find the one that feels most comfortable and gives you the results you’re looking for.

Choking Up On A Bat Increases Bat Speed

A choke-up is when the hitter’s hands are moved up the bat to get closer to the barrel. This can be done by moving the bottom hand up the handle or by holding the bat higher up with both hands. A choke-up increases bat speed because it shortens the distance the bat has to travel through the hitting zone. This gives the hitter more time to make contact with the ball.

The choke-up also puts the hands in a better position to get through the hitting zone quickly. When the hands are closer to the barrel, they can get through the zone faster and have a shorter swing. This allows the hitter to wait longer on pitches and still make solid contact.

What Does Choking Up On The Bat Do?

Batters choke up on the bat for two primary reasons. The first reason is to increase bat control. By gripping the bat closer to the barrel, a batter has greater control over where the barrel enters the hitting zone. This can be helpful when trying to make contact with an off-speed pitch or when trying to hit a ball to the opposite field.

The second reason batters choke up is to reduce the weight of the bat. A lighter bat is easier to swing through the zone and will increase a batter’s ability to make contact with the ball.

What Effect Does Choking Up On The Bat Have?

Some experts say that choking up on a bat can help a batter have more control over their swing. When you choke up, you are shortening the bat’s length, which some belief gives you more power and accuracy. In addition, choking up on the bat can help keep your hands steady when you make contact, which is vital for making solid contact.

There are also some drawbacks to choking up on the bat. For one, it can take away some of your power. In addition, if you don’t have a strong grip on the bat, you may find that it slips out of your hands when you swing. Lastly, choking up too much on the bat can make it more difficult to contact the ball.

So, what’s the verdict? Is choking up on a baseball bat a good or a bad idea? The answer may depend on your individual hitting style and what you are trying to accomplish at the plate. If you want more power, you may want to grip the bat lower.

However, choking up on the bat may be the way to go if you are looking for more control and accuracy.

Ultimately, it is up to you to experiment with different grip positions and find what works best for you.

Does Choking Up Decrease Power?

A loss of power happens when the hitter doesn’t hold the bat correctly. This happens when the batter is focused on just getting the ball in play by hitting it. They will hold the barrel of the bat close to the knob, and often, their front arm will be tight against their body. This bat grip strangles the bat, making it difficult for the hitter to generate any power. The sweet spot is at the very end of the bat, so they are only using a small portion of it by choking up.

So, is it a good or bad idea to choke up on a bat? It really depends on the situation and what you’re trying to accomplish. If you’re looking for more control and accuracy, then choking up on your baseball bat is your best bet. However, if you’re trying to hit for power, you’ll want to grip the bat lower down. Ultimately, it’s up to you to experiment and determine what works best for you.